A.1 The character areas in the Durham City Conservation Area comprise:

A.2 Durham County Council (2016b) undertook a review of the area and a character appraisal in 2015/16. The character areas are summarised below.

A.3 The dramatic position of the Norman Cathedral and Castle on the raised plateau of the Durham Peninsula created a formidable citadel protected by encircling medieval defensive city walls incorporating fortified gateways and the natural defence afforded by the River Wear. The network of narrow streets radiating out from the Peninsula lead down Saddler Street, the site of a heavily fortified gateway, to the Market Place and out through the site of the Clayport Gate to Claypath and Gilesgate.

A.4 The evolution of the Peninsula from a fortified citadel with Cathedral and Castle, dominating the Market Place and town at the lower northern end, to a romantic landscape with ornamental gardens combine to create a distinctive character and identity of exceptional significance. The survival of the medieval street layout with key pilgrimage routes has remained largely unaltered. The physical and visual experience of narrow medieval streets obscuring views of the Cathedral and Castle and then suddenly revealing glimpses of the World Heritage Site add to the enjoyment of the environment. The variety, scale and character of the buildings, including a high percentage of Grade I, II & II* listed buildings and scheduled monuments, contribute to a quality of the multi-layered historic environment and its sense of place.

A.5 The Framwellgate Character Area forms the north-western part of the Durham City Conservation Area. It includes the medieval streets of Framwellgate, Sidegate and Claypath; the eastern boundary is partially defined by Tinklers Lane. The area stretches westward to Wharton Park and the southern end of the Aykley Heads Estate leading across the railway line to Diamond Terrace, Sidegate and Crook Hall. The gentle bend of the river from Milburngate Bridge to The Sands includes new development at Walkergate and Freemans Reach; above the terraced Walkergate scheme is the Gala Theatre in Millennium Place and Claypath. On the south side of Claypath stand a terrace of businesses with residential cul-de-sacs located at intervals backing onto Leazes Road.

A.6 The setting is reinforced by the dramatic topography dominated by the Cathedral and Castle, below which lie the Market Place and St. Nicholas Church at the neck of the Peninsula, once protected by the Clayport Gate. The land falls dramatically to the riverbanks at Milburngate House and opposite at Walkergate. The land rises steeply to the north with an extensive open area above Crook Hall and beyond including the southern end of Aykley Heads.

A.7 The Framwellgate Character Area is of significant historical interest. The medieval town plan of the City, based on four ‘boroughs’, changed little over 600 years. The Bishop’s Borough included Framwellgate and Sidegate; along the riverside at Walkergate stood the Bishops Mill. The Fram Well, an ancient monument located at the top of Sidegate, was used from medieval times to provide a piped water supply to the City pant in the Market Place, courtesy of the owner of Crook Hall, in the manor of Sidegate. The north of the city was in the ancient parish of St Margaret. In the nineteenth Century the new church of St Cuthbert’s was built in North Road. A leper hospital and chapel of St Leonard’s are believed to have stood on or near the present St Cuthbert’s graveyard. Claypath was the main route to the City leading through the Clayport Gate. Pilgrims stayed at Kepier Hospital and took the route along the river arriving at Walkergate, or by Clayport and the Clayport Gate.

A.8 The Crossgate Area occupies the western side of the River Wear and comprises two distinctive components. First the urban area which has developed around the main streets, roads and junctions running from Framwellgate Bridge (Crossgate, Allergate, South Street, North Road, Albert Street). The second part is formed by the green fringes such as Flass Vale in the north and Observatory Hill in the south. The northern boundary extends from Framwellgate Bridge following North Road as far as St. Leonard’s School and then travels along the edge of Flass Vale. To the west the boundary extends to Newcastle Road at the junction of Nevilles Cross. To the south it reached the roundabout at Quarryheads Lane and to the east the incised river gorge of the River Wear.

A.9 The Crossgate Area, is one of the oldest sections of the City. Historically it constituted a separate borough containing the principle streets of Crossgate, Allergate and South Street. Its current primarily residential character is at least partly the result of 19th century residential expansion of this part of the City alongside the construction of North Road as a principal shopping street. The area’s medieval origins and history, combined with multi-layered development, creates a rich variety of buildings and diverse historic streetscapes, while the area’s rising topography creates magnificent views across the River Wear to the World Heritage Site. Also on the land rising away from the river is the green and wooded Flass Vale, while to the south of the area is the Observatory. These factors give rise to Crossgate’s local distinctiveness and character and which make a significant contribution to the wider Durham City Conservation Area.

A.10 The Elvet area comprises the historic boundaries of the two former medieval sub-settlements of the City; these being the Borough of Elvet which includes Old Elvet and New Elvet; the Barony of Elvet which was centred on St. Oswald’s Church and today includes Hallgarth Street, Church Street, Whinney Hill, and part of Quarryheads Lane. The defining characteristic is the juxtaposition of the built form with the surrounding landscape. The area’s western edge is formed by the gorge of the River Wear; to the east the flatter, open aspect around the racecourse and Green Lane, provides an important transition between open countryside and the urban environment. The character area has the impressive backdrop of the Cathedral and Castle with many outstanding views.

A.11 The area is significant for the surviving medieval street pattern, particularly in Old Elvet and Hallgarth Street, with historic buildings pressed tightly together directly onto the back of pavements, with evidence of medieval burgage plots at the rear; such house plans were the common design within the city centre. Old Elvet, one of Durham’s most impressive streets, is noteworthy for its graceful Georgian facades along a medieval route. Vennels or passageways connect the riverside to the urban landscape, a characteristic of the whole City, contributing to pedestrian permeability.

A.12 The Gilesgate Area occupies the north-eastern part of the Durham City Conservation Area. It is bounded to the north by the River Wear, just west of the medieval Kepier Hospital and its associated lands. It then wraps around the modern developments to the west of the Kepier site and meets the Framwellgate area at the eastern end of the Sands. At its eastern end the boundary runs tightly round the edge of the historic core of Gilesgate, along Young Street and down the eastern edge of Pelaw Woods and along the river until it meets the Elvet Area.

A.13 Gilesgate forms the north eastern boundary of the Durham City Conservation Area. Historically the area constituted one of the city’s four separate boroughs which were essentially single street settlements which expanded towards the Peninsula. The Borough of St. Giles was a continuous street connection to Claypath, the borough boundary marked by Tinklers Lane, but was dissected in the 1960s by the construction of the A690. Notwithstanding this, the original street pattern is still distinguishable. The historic street-scape formed around the evolved village green that is lined with buildings from the 17th and 19th centuries. It has a dramatic setting resulting from the steeply rising land from which the World Heritage Site monuments can be seen from numerous vantage points.

Map 7: Durham in the late medieval period: its boroughs, churches and important buildings 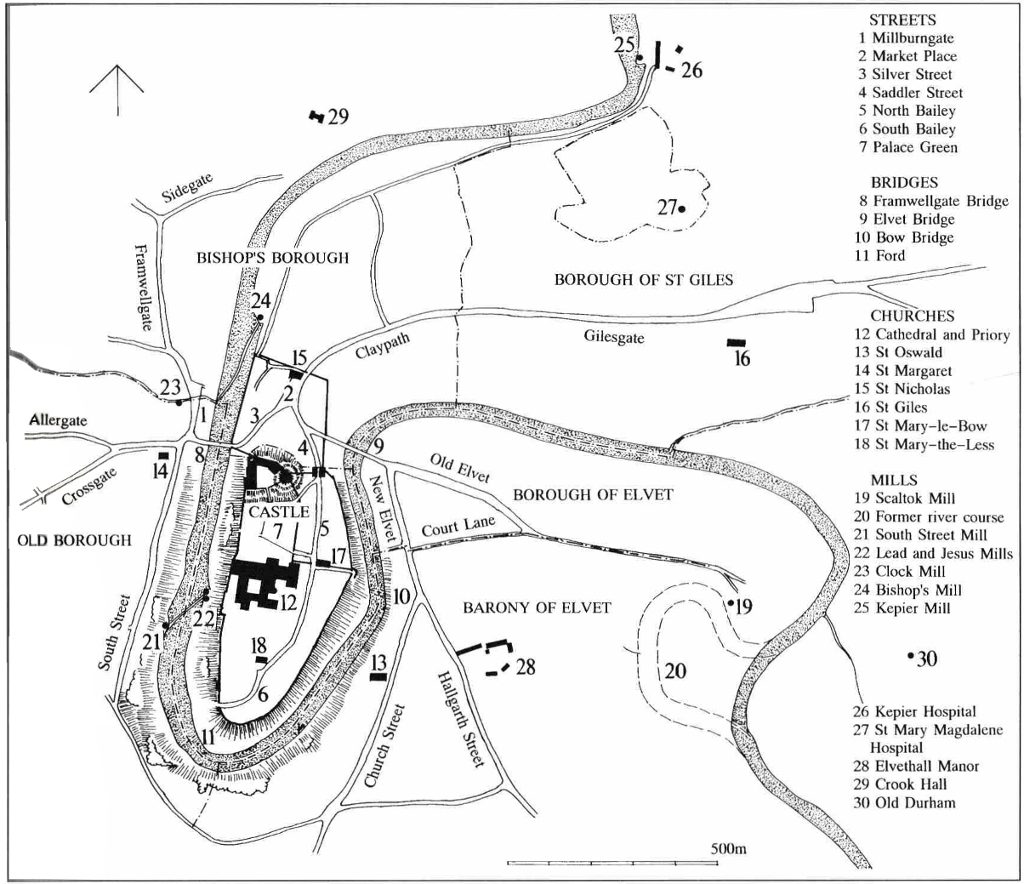