The following areas (shown on Proposals Map 2) are designated as Local Green Space where inappropriate development should not be approved except in very special circumstances:

4.103 It should be noted that the Neighbourhood Plan can only cover areas that are within its boundary. One of the Local Green Spaces – Neville’s Cross Battlefield – also crosses over into the neighbouring parish of Bearpark. Future co-operation with the neighbourhood plan in this parish could hopefully result in the whole of this important area becoming a Local Green Space.

4.104 The NPPF (para. 99 to 101) provides for neighbourhood plans to designate Local Green Spaces allowing “communities to identify and protect green areas of particular importance to them” (PPG para. ‘Open space, sports and recreation facilities, public rights of way and local green space’ 005 to 021). “Whether to designate land is a matter for local discretion. For example, green areas could include land where sports pavilions, boating lakes or structures such as war memorials are located, allotments, or urban spaces that provide a tranquil oasis.” (para. 013) “However, other land could be considered for designation even if there is no public access (e.g. green areas which are valued because of their wildlife, historic significance and/or beauty). Designation does not in itself confer any rights of public access over what exists at present. Any additional access would be a matter for separate negotiation with land owners, whose legal rights must be respected.” (para. 017) “Designating a green area as Local Green Space would give it protection consistent with that in respect of Green Belt, but otherwise there are no new restrictions or obligations on landowners.” (para.020). Therefore the existing public access status and operational use of the designated Local Green Spaces can continue as usual.

4.105 Policies for managing development in a Local Green Space should be consistent with those for Green Belts (NPPF para. 101) Therefore, inappropriate development, harmful to the characteristics that make the Local Green Space special, would not be approved except in very special circumstances (NPPF para. 143). However, there are exceptions for some types of new building (NPPF para. 145) e.g. “buildings for agriculture … the provision of appropriate facilities … for outdoor sport, outdoor recreation, cemeteries … and allotments, ; as long as the facilities preserve the openness of the Green Belt [Local Green Space] and do not conflict with the purposes of including land within it; the extension or alteration of a building provided that it does not result in disproportionate additions over and above the size of the original building; … the replacement of a building, provided the new building is in the same use and not materially larger than the one it replaces”. Additionally, some forms of development are also not inappropriate (NPPF para. 146) “provided they preserve its openness and do not conflict with the purposes of including land within it” e.g. “local transport infrastructure which can demonstrate a requirement for a Green Belt [Local Green Space] location; the re-use of buildings provided that the buildings are of permanent and substantial construction; e) material changes in the use of land (such as changes of use for outdoor sport or recreation, or for cemeteries and burial grounds)”. 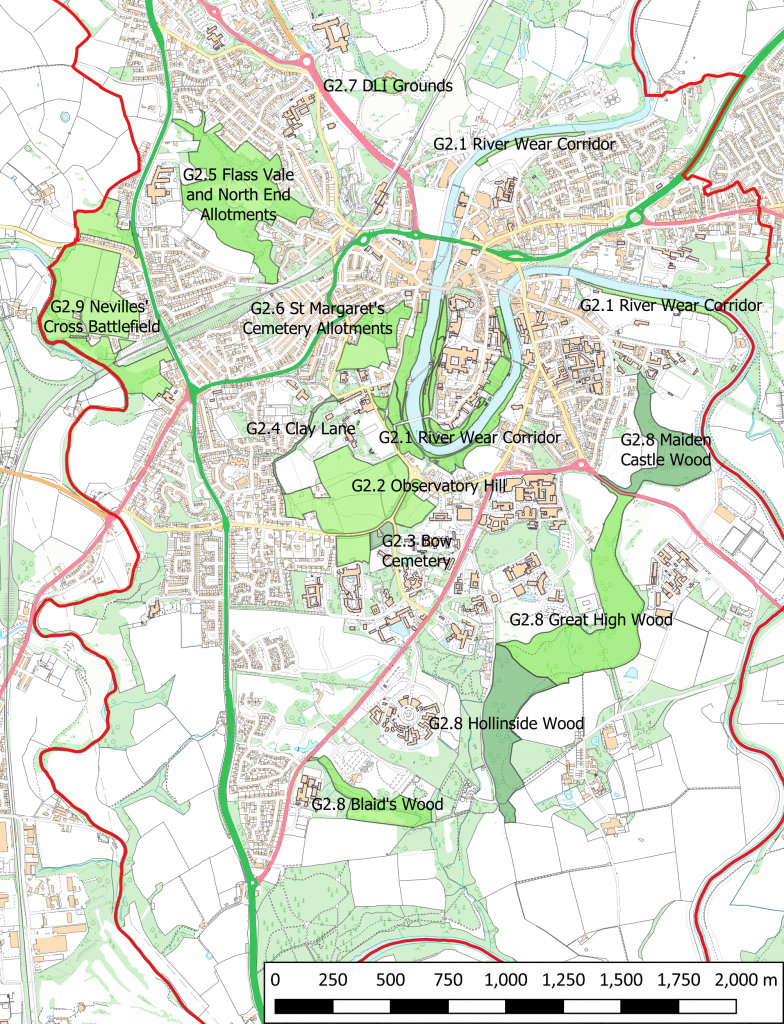 An interactive version of this map is available at http://maps.durhamcity.org.uk/npf/Proposals_Map_2.php

4.107 Some of the areas designated here as Local Green Spaces also possess other types of designation, e.g. being within the Green Belt or a conservation area or being a wildlife site or heritage asset. National Planning Practice Guidance states that land that is already protected can be designated as a Local Green Space if there is additional local benefit (PPG ‘Open space, sports and recreation facilities, public rights of way and local green space’ para. 010 and 011). Different types of designation achieve different purposes. The areas listed here are of particular importance to the local community as the reasons given above demonstrate. Additionally, these areas are not as secure as their existing protections would imply. The development pressure in a small constrained area such as Our Neighbourhood is high. There is recent history of planning approvals for large scale developments in the Green Belt with predicted future plans for much more development in the Green Belt. In the Forum’s priority survey (Durham City Neighbourhood Planning Forum, 2015) respondents had high regard for the ‘woodland’ wedges bringing green space into the City, were concerned about loss of / lack of open and green spaces and threat to green belt, and wanted to protect green spaces/green belt and the environment.

4.108 New sites might become available in Our Neighbourhood that might merit designation as Local Green Spaces. This would require amendment of the Neighbourhood Plan. One such site is Mount Oswald. This formed part of an area of open space protected under saved Policy E5.2 of the City of Durham Local Plan. The Mount Oswald site, previously a golf course, was land that had not been built on since the Middle Ages when it was agricultural land. It therefore contains assets of wildlife value including mature trees and a pond containing protected species. The current housing development on this site needs to be placed within the context of a long battle by local residents to retain this green space. The Mount Oswald site is currently being developed to a level greater than provided for in the City of Durham Local Plan. Open spaces retained within that development, including a complex of interconnected parks and open spaces (which retains and adds to the existing green assets) are therefore of particular importance to the local community and likely to warrant designation as a Local Green Space. As areas of open space in this development are being defined through a series of reserved matters applications, it isn’t possible to finalise boundaries at this time. Inclusion, and enhancement, of existing green assets within new developments is the aim of Policy G1. New residential areas might include green areas that were planned as part of the development. Such green areas might be designated as Local Green Space if they are demonstrably special and hold particular local significance. (PPG ‘Open space, sports and recreation facilities, public rights of way and local green space’ para. 012).

Next section: Policy G3: Creation of the Emerald Network