Development proposals within and affecting the Durham City Conservation Area should take into account, and meet where relevant, the following requirements, by:

Development proposals within and affecting the setting of the Burn Hall Conservation Area which fall within planning control should sustain and enhance the significance of the Conservation Area. 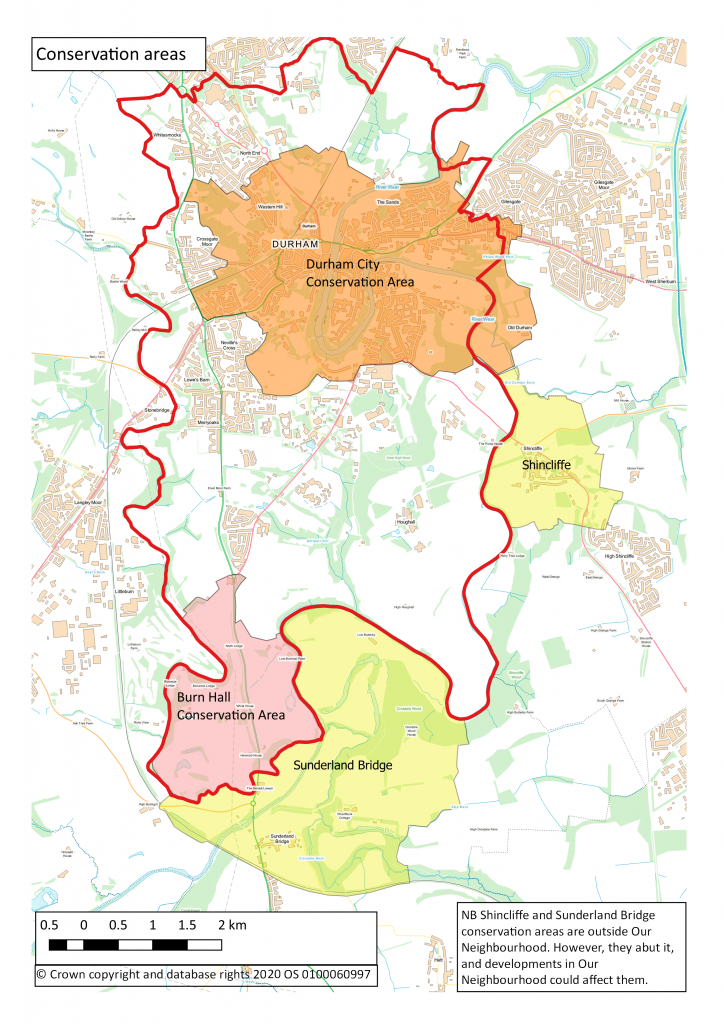 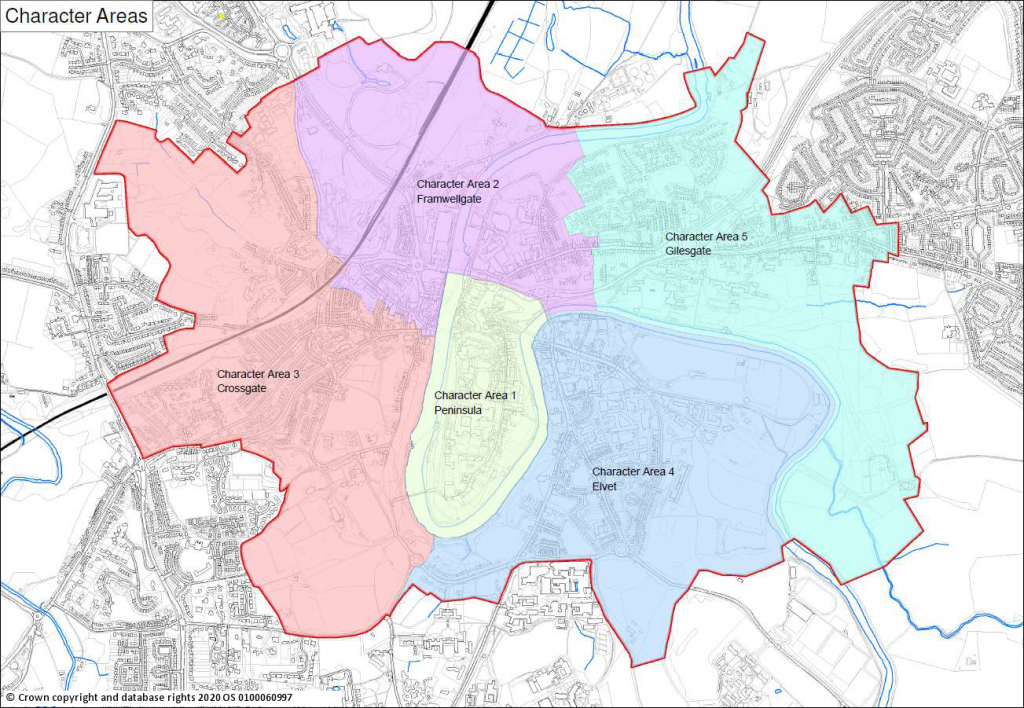 4.51 The Durham City Conservation Area (see Maps 3 and 4) includes the Peninsula with the Cathedral and Castle as its centrepiece, the Market Place and medieval streets leading from Silver Street to the west, Claypath to the north-east, Elvet to the east and the slightly more distant medieval suburb of Gilesgate. The natural ‘bowl’ in which the City is located, topography, the importance of green wedges of countryside and other significant green areas contribute significantly to, and enhance, the setting of the historic townscape of the City as a whole. The Conservation Area is divided into five Character Areas, based on the Peninsula and the four adjacent historical Boroughs which have changed little: Framwellgate, Crossgate, Elvet and Gilesgate. A more detailed description of these character areas is given in Appendix A.

4.52 Durham City was designated as a Conservation Area in August 1968 focusing on the peninsula, and the area covered was significantly enlarged in 1980 to incorporate a much larger section of the City . The Durham City Conservation Area was reviewed in 2015, with some boundary changes, and a character appraisal document produced and formally approved on 29th July 2016. A management proposals section is included in the individual Character Area documents (Durham County Council, 2016b) and development must be in compliance with these. In addition there are appendices naming and describing listed buildings and notable unlisted buildings (i.e. non designated heritage assets).

4.53 The Burn Hall Conservation Area (see Map 3) includes the country estate of Burn Hall (listed Grade II*) with a complex of late eighteenth and early nineteenth century buildings, which stand in a site of 72 hectares. The estate is situated three miles south of Durham City in a rural area, adjacent to the west side of the A167 road, and is enclosed to the north, west and south by the River Browney. The Hall faces south with land falling away and offering views of the river. The principal building is a two storey sandstone Hall designed by Ignatius Bonomi (with an impressive porte-cochere entrance). In the grounds are a nineteenth century wooden conservatory (listed Grade II) and a stone ice house (listed Grade II). In the park the Home Farm complex includes a stone Cow House and brick Bull House (late eighteenth century listed Grade II*). Nearer the Hall, the walled kitchen garden and estate cottages, now converted into offices, date from the late eighteenth century (listed Grade II). The grounds are a Grade II registered park and garden.

4.54 This Plan recommends that a management plan for the Burn Hall Conservation area is developed and made publicly available with the aim of further protecting this Conservation Area.

4.55 Conservation Areas are places where buildings and spaces around them interact to form distinctive visible areas of quality and “special architectural or historic interest, the character or appearance of which it is desirable to preserve or enhance” (PPG ‘Historic environment’ para. 023).

4.56 The City of Durham is one of the most important historic cities in Britain. The quality and architectural coherence of the buildings, combining medieval elements with Georgian and Victorian later interventions, contributes to the historic environment. A medieval network of streets and alleyways (vennels), centred on the Peninsula and radiating outwards, with dramatic topography and extensive green spaces make the Durham City Conservation Area exceptional. The City’s unique townscape forms the immediate setting of the World Heritage Site, its streets and domestic scale emphasising the World Heritage Site’s dominance.

4.57 The significance of Durham’s historic environment is recognised and cherished by experts and local people, who responded to the Durham City Conservation Area appraisal consultation and appreciate that national heritage is a significant economic and social resource. These responses are summarised in the individual Character Area appraisal documents (Durham County Council, 2016b). The importance of participation and enjoyment of the historic environment for present and future generations must be supported by development that is of high quality in both design and execution and has a durable quality: aspiration for imaginative and well designed buildings is strongly recommended by Historic England (2008, para.138).

Next section: Policy H3: Our Neighbourhood Outside the Conservation Areas