Green spaces within Our Neighbourhood that are of significant environmental, landscape or historical value are designated as Local Green spaces. These areas, as shown on the proposals map, comprise:

Development proposals that cause harm or loss to the characteristics that make these sites important and special to local people will be refused, unless very special circumstances can be demonstrated where the loss or harm is necessary to achieve substantial public benefits that outweigh the loss or harm. If this loss or harm cannot be avoided, then appropriate mitigation measures must be included in the proposal.

4.94 The NPPF (para. 99-101) provides for neighbourhood plans to designate Local Green Spaces allowing “communities to identify and protect green areas of particular importance to them” (PPG para. ‘Open space, sports and recreation facilities, public rights of way and local green space’ 005 to 021). Policies for managing development in a Local Green Space should be consistent with those for Green Belts (NPPF para. 101)

4.96 It should be noted that the Neighbourhood Plan can only cover areas that are within its boundary. One of the Local Green Spaces – Nevilles Cross Battlefield – also crosses over into neighbouring parishes. Future co-operation with the neighbourhood plan in this parish could hopefully result in the whole of this important area becoming a Local Green Space. 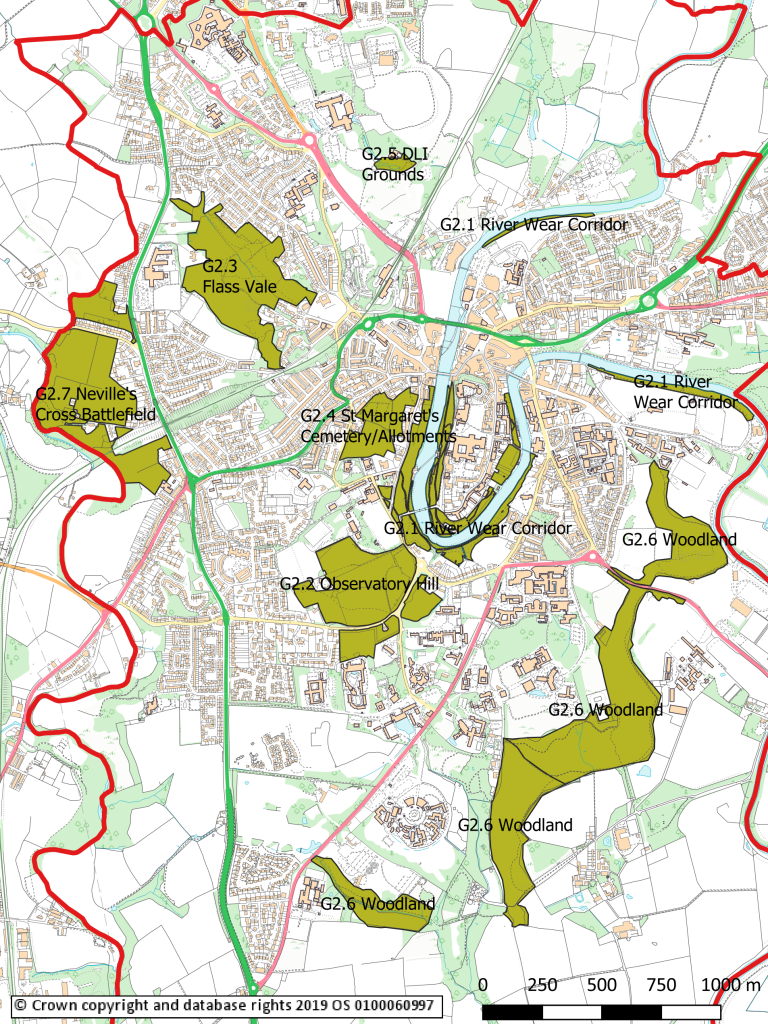 4.97 Some of the areas designated here as Local Green Spaces also possess other types of designation, e.g. being within the Green Belt or a conservation area or being a wildlife site or heritage asset. National Planning Practice Guidance states that land that is already protected can be designated as a Local Green Space if there is additional local benefit (PPG ‘Open space, sports and recreation facilities, public rights of way and local green space’ para. 010 and 011). Different types of designation achieve different purposes. The areas listed here are of particular importance to the local community as the reasons given above demonstrate. Additionally, these areas are not as secure as their existing protections would imply. The development pressure in a small constrained area such as Our Neighbourhood is high. There is recent history of planning approvals for large scale developments in the Green Belt with predicted future plans for much more development in the Green Belt. In the Forum’s priority survey (Durham City Neighbourhood Planning Forum, 2015) respondents had high regard for the ‘woodland’ wedges bringing green space into the City, were concerned about loss of / lack of open and green spaces and threat to green belt, and wanted to protect green spaces/green belt and the environment.

4.98 New sites might become available in Our Neighbourhood that might merit designation as Local Green Spaces. This would require amendment of the Neighbourhood Plan. One such site is Mount Oswald. This formed part of an area of open space protected under saved Policy E5.2 of the City of Durham Local Plan. The Mount Oswald site, previously a golf course, was land that had not been built on since the Middle Ages when it was agricultural land. It therefore contains assets of wildlife value including mature trees and a pond containing protected species. The current housing development on this site needs to be placed within the context of a long battle by local residents to retain this green space. The Mount Oswald site is currently being developed to a level greater than provided for in the City of Durham Local Plan. Open spaces retained within that development, including a complex of interconnected parks and open spaces (which retains and adds to the existing green assets) are therefore of particular importance to the local community and likely to warrant designation as a Local Green Space. As areas of open space in this development are being defined through a series of reserved matters applications, it isn’t possible to finalise boundaries at this time. Inclusion, and enhancement, of existing green assets within new developments is the aim of Policy G1. New residential areas might include green areas that were planned as part of the development. Such green areas might be designated as Local Green Space if they are demonstrably special and hold particular local significance. (PPG ‘Open space, sports and recreation facilities, public rights of way and local green space’ para. 012).

Next section: Policy G3: Creation of the Emerald Network